Via Ferrata in Telluride

A via ferrata (Italian for “road of iron”) or klettersteig (German for “climbing path”) is a mountain route which is equipped with fixed cables, stemples, ladders, and or bridges. The use of these added elements allows otherwise isolated routes to be joined to create longer routes which are accessible to people with a wide range of climbing abilities. The Via Ferrata Telluride Adventure is a thrilling technical hike along the east end of the Telluride canyon, offering spectacular views of Bridal Veil Falls and the Telluride Valley. This is a unique adventure and our guide service supply you with knowledgeable guides and top of the line equipment for this unique adventure. If you want a new and exciting trip, this offering is for you.

Whether you are from the Telluride area or visiting as a tourist, don’t miss your chance to explore the Telluride Via Ferrata with San Juan Outdoor Adventures.  Book a private Via tour climbing package and get started on your outdoor adventure today.

We have teamed up with Life Feeling Photography, a U.S. Forest Service fully-permitted adventure photographer. Contact Matt Kroll at www.lifefeelingphotography.com so you can go home with professional photos of your Telluride adventure.

Our Via Ferrata adventures are the San Juan Outdoor School’s newest trip. We will get you properly geared up for your adventure. Our trained Guides will teach you how to properly use the technical equipment while you learn about this unique route.

If you’re interested in a semi-private day please ask about pricing and availability at the time of booking.

You will be responsible for providing your own food and beverage. We will now be offering transportation.

Additional Information for Visitors and Those New to Via Ferrata 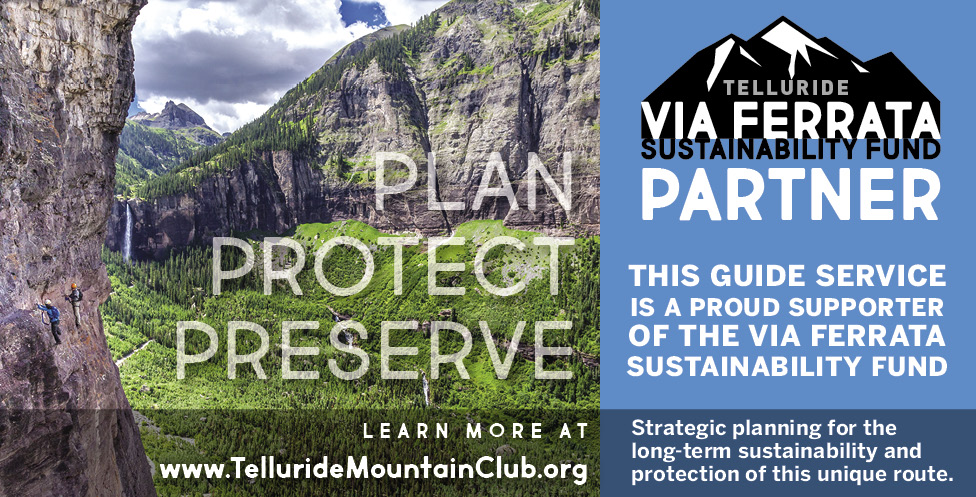 The phrase “via ferrata” is of Italian origin and translates to “iron path.”  There are many via ferratas all over the world, and these paths have varying lengths.  There are short via ferratas that can be completed by a climber in less than an hour, as well as via ferratas that are up to 3,300 feet high.  Via ferratas also vary in difficulty levels.  These paths can range from short, simple paths to steep and difficult routes which require the skills of that of a serious rock climber.  In general, via ferratas are traveled in an ascent route rather than a descending route.

Telluride has a via ferrata, which is often called the “Krogeratta,” having gotten this name after its builder, Chuck Kroger.  Chuck Kroger was known as a local legend in the area of climbing and came to the Telluride area in the 1970s.  Chuck Kroger started building Telluride’s via ferrata in 2006 but unfortunately passed away from cancer before he could complete the project.  Others took on the project after his death and named the via ferrata Krogeratta after him.  Telluride’s Krogeratta is a great place to start with the sport of climbing via ferratas, since it is accessible for beginning climbers, but also provides exposure and air for more experienced climbers.

The Telluride Via Ferrata (the Krogeratta) has a route that goes up to 600 feet above the forest on the ground level below.  While climbing the Telluride Via Ferrata, climbers have an amazing view of the Bridal Veil Falls.  The Bridal Veil Falls are the highest free-falling waterfall in the entire state of Colorado.  Climbers on the Krogeratta also have views of the peaks of the San Juan Mountains and can see gorgeous views of the entire town of Telluride below them as they travel.  Telluride’s Via Ferrata is a great challenge for newer climbers as well as more experienced ones, though it is not the best activity for those with a fear of heights!

The modern-day equipment for climbing a via ferrata is called a via ferrata set.  This set includes a lanyard and two carabiners.  The lanyard utilizes an energy-absorbing system, typically with a “Y” tape configuration.  The “Y” configuration is the only one that is approved by the UIAA.  Older lanyard sets used a “V” configuration, which had the potential to be dangerous when both arms were clipped at the same time because in that case, the energy absorber would not work.

Via Ferrata Equipment—Energy Absorbers and Carabiners

There are carabiners that are made specifically for the use during climbing via ferratas.  These specially-made carabiners are designed with a larger than usual opening and are made to be strong enough to survive high falls.  These carabiners include a stamping with the letter K in a circle.  The K stamp stands for “Klettersteig,” which translates to via ferrata in German.

Modern-day via ferratas developed around the nineteenth century with the growth of Alpine exploration and tourism.  There are multiple examples of via ferratas in the mid-to-late eighteen-hundreds.  In 1880, on Pic du Midi d’Ossau in the Pyrenees, there were iron climbing aids installed.  In 1881, these iron climbing aids were then installed in Ordesa.  What we now know as via ferratas were installed in the Limestone Alps and these routes are still used today.  In 1899, the German Allgau Alps were constructed utilizing via ferratas.  Before the First World War, the via ferrata in the Possnecker Path in the Sella Group was finished.

The Dolomites in the First World War

During the First World War, in 1914, the Dolomites were a part of the Austro-Hungarian Empire.  The Austro-Hungarian Empire was a part of the Central Powers and fought against Britain, France, Italy, and Russia.  During this time, Austria’s troops were in Russia when they withdrew to a defensive line that ran through the Dolomites.  From this time through the last months of 1917, the Austrians fought mountain-based battles with the Italians.  Via ferratas were used to guide the troops through the peaks and tunnels.  Ultimately, the soldiers created a network of via ferratas throughout this area to aid in their battles.  After the Second World War, the via ferratas used in the First World War were restored and recreated using steel cables and iron ladders along with metal rungs with anchors in rocks rather than the wooden structures that were used by the troops in the First World War.

Modern Developments in Via Ferratas

Since the First and Second World Wars, the popularity and usage of via ferratas have only grown.  Alpine clubs in the 1970s and 1980s developed new routes in some of the more traditional climbing areas, such as the Dolomites and the Northern Limestone Alps.  Later, in the 1990s and 2000s, the development of via ferratas started to go down a more commercial path.  Various organizations and companies weighed in on the utility of creating new via ferratas in newer and different locations.  These organizations and companies included outdoor activity centers, local communities, and cable car companies.  Via ferratas were considered helpful to the local tourism industry and to give new visitors to park more options for activities.

The new development of via ferratas has gone beyond the original location areas and has now caught on in the rest of the Alps and even beyond these areas.  By the year 2003, France had approximately 100 via ferratas.  The modern trend of creating via ferratas is developed sport routes that are typically challenging and located closer to valleys.  These sport-oriented via ferratas feature very steep dips that require an extensive amount of strength to successfully climb.

Another feature of modern via ferratas is the use of dramatic locations, such as via ferratas requiring travel along waterfalls or through canyons.  These newer pathways also occasionally feature zip wires and wire bridges, which have been added in an effort to make the via ferratas more appealing to park visitors.  Mountain climbing through via ferratas is now widely considered a valid mountain activity.  With its growing popularity as a sport, climbers are now able to purchase equipment specifically for this activity and guidebooks for popular locations.  There has also been a grading system developed specifically for via ferrata climbing.

In the Italian Dolomites region, the scale used is from one to five, while the Kurt Schall guides from the Klettersteig-Atlas series use a scale ranging from A to E.  On this scale, A is considered the easiest path and indicates that the path is straightforward and includes climbing aids.  The most difficult level, E, indicates that the via ferrata is extremely difficult, with a path that ranges from vertical to overhanging, with small footholds and typically, no climbing aids other than the wire.

Telluride Adventures kindly asks if your requested booking is within 72 hours to please call about availability (970) 728-4101. Thank you!